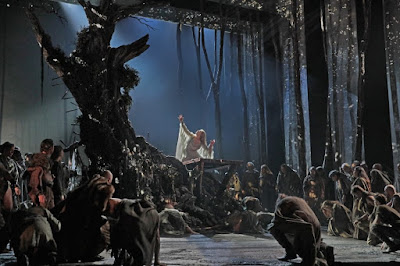 Norma, Vincenzo Bellini’s great bel canto opera has opened the Metropolitan Opera season only three times. I was there at the 1981 opening night, a battlefield of an evening featuring soprano Renata Scotto fighting a claque hell-bent on ruining the night for the popular soprano, supposedly because she made random comments comparing herself to Maria Callas, one of the great interpreters of this role.  The Callas army would not take Scotto's so-called insult sitting down. When the soprano made her entrance the boos and catcalls poured down, protesters were ejected from the auditorium, and the gorgeous aria "Casta Diva," and pretty much the rest of the evening was ruined.

This time, to interpret the role of the Druid priestess, the MET chose Sondra Radvanovsky, a singer who specializes in the bel canto repertory, (in 2016 she sang the three Donizetti queens Triathlon at the MET), and who has the kind of voice that at times reminds you of Callas.  The voice is not pretty, but it is agile, flexible, and can ably handle the coloratura that makes this role according to Wagnerian specialist Lilli Lehmann, who first sang Norma at the MET in 1890 (in German!), even more difficult than the three Brünnhilde roles in Richard Wagner's Ring of the Nibelung, 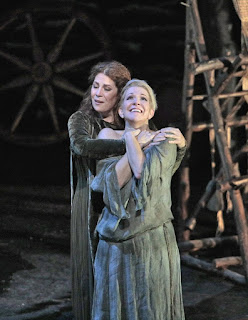 Ms. Radvanovsky started poorly.  Her "Casta Diva" was filled with audible gear changes, and some flat notes that did not impress.  However, she grew more and more assured in her interpretation, eventually rising to the level we all expected of her.  Conductor Carlo Rizzi led a beautiful reading of the score with intelligent tempi and clean sound, oftentimes coming to the rescue of the singers: exactly what a good conductor should do. The Metropolitan Opera Orchestra has rarely sounded this good in this type of repertory.  At times, Mr. Rizzi had to bring up the dynamics of the orchestra to compete with the MET chorus which sounded way too robust too many times.

The new production by Sir David McVicar was a conservative gift to New York opera lovers who prefer their new productions meat-and-potatoes.  The huge MET set elevator was used to portray the two scenes where the opera takes place.  A clearing in the forest, featuring a scary looking tree reminiscent of the one in Guillermo Del Toro's great film Pan's Labyrinth, and Norma's hut, which looked as huge as the Pantheon in Rome, and shared with that Roman landmark a hole in its roof.

This production will run for about three months, with a change of cast in December.  By all means, if you like this opera do not miss it.
Posted by Vincent Vargas at 4:51 PM