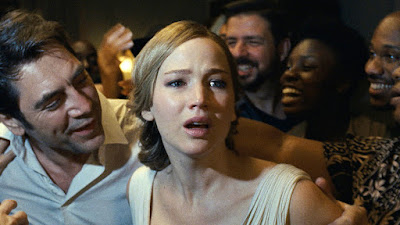 Mother! (With an exclamation point, no less!) What can one say about a movie called Mother! that starts off with the word “baby” and goes on a roundabout cyclical arc to eat it’s tail ending with the same word?  The answer is a lot. This will be, without a doubt, the most discussed film of the early fall season. A cryptic allegory where Mother (Jennifer Lawrence) and Him, her husband played by Javier Bardem, live in a huge fixer-upper of a house in the middle of nowhere, surrounded by sunlight and trees, and where the word Paradise is used to describe their Adam and Eve existence.

So, God rested on the seventh day, and that’s where Darren Aronofsky took over. As a dress rehearsal for the plagues that he will send down later on in the film, the director, who also wrote the script, sends them their first test in the shape of a dying, chain smoking Ed Harris and his she-devil of a wife Michelle Pfeiffer.  The two of them invade Mother and Him’s domestic dwelling in the same way that unseen creatures begin taking a couple’s house in author Julio Cortázar’s masterful short-story “Casa tomada.” In the Argentinian writer’s fable, the house is overtaken by some kind of grotesque animal (the short story, after all, is part of a collection called Bestiary), a veiled reference to the Fascist government of Juan and Eva Perón. In Aronofsky’s film the domestic assaults take place in order to fulfill the Old Testament narrative the director is adapting. Soon after, Harris and Pfeiffer’s kids arrive already in Cain and Abel mode, and they play their parts as you would expect them to: just like you learned about them in Sunday Bible school.

It's definitely the kind of film that we can't just watch.  It forces us to delve into it because clearly the film hides more meaning that it outwardly explains.  The conversations viewers can have about it are best reserved for comparisons between it and the Good Book. The film is an obvious retelling of selected portions of the Bible, the more dramatic the passages the better.  Beyond this obvious aspect, one can argue that it is also a cautionary tale about celebrity culture. Bardem's character is a poet with some incredibly over-the-top mass appeal.  Hordes of his fans invade their very private home and trash the house.  The fact that a poet in 2017 can have such mass appeal is a tough one to swallow, but this is the conceit that Mr. Aronofsky needs us to accept.

In 2014, Mr. Aronofsky brought us Noah.  Next time he might as well just film the Bible's Apocalypse and be done with it.  No sense hiding it in thinly veiled layers of domesticity gone amuck.
Posted by Vincent Vargas at 6:38 PM