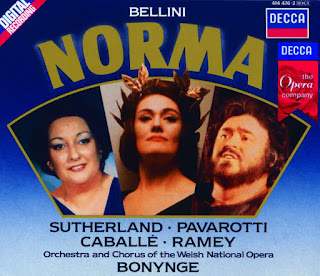 On Monday night the Metropolitan Opera opens with a new production of Norma, by Vincenzo Bellini.  The new production will be staged by Sir David McVicar, and it will star Sondra Radvanovsky as the Druid high priestess, Joyce DiDonato as Adalgisa, and Joseph Calleja as Norma's unfaithful lover Pollione.  The opera will be conducted by Carlo Rizzi.  It promises to be a great opening night for the MET, and the house will no doubt fill with applause and bravos as long as the new sets and costumes by Robert Jones and Moritz Junge appeal to the New York crowd, which we all know is largely a conservative bunch who like their opera stagings meat-and-potatoes. Over the years the New York public have rejected the experimentation that Peter Gelb has brought to New York since he took over as General Director.  Who can forget the booing that occurred during opening night at the unveiling of Luc Bondi's staging of Tosca.

In preparation for Monday evening (I will be there, of course) I have been listening to a few recordings of the opera, and I have taken out my trusty orchestra score, and followed along.  Of course, I already went through the 1953 Maria Callas recording which is a magnificent rendition of the opera.  Callas in her prime, accompanied by tenor Mario Filippeschi, the great Ebe Stignani as a memorable Adalgisa, and Nicola Rossi-Lemeni, one of the most important Italian basses of the post war years.  The great Tullio Serafin, who basically steered Callas into the bel canto repertory, conducts the orchestra.  The sound is basic 1950's, and though it probably sounds better today than when it was originally issued, the recording quality cannot compare to the great Decca/London vinyls.  Those old London ffrr (full frequency range recording) pressings, many of us collected as LP's, have been beautifully remastered into CDs.  It is incredibly satisfying to hear the Joan Sutherland, Luciano Pavarotti, Montserrat Caballé and Samuel Ramey Norma recording from 1987.  The orchestra of the Welsh National Opera was conducted by Richard Bonynge.

Sutherland first sang Norma in Vancouver in 1963, and she recorded the role in 1965 for RCA (now issued by Decca).  Twenty years later she went back to the studio and made this recording.  Obviously, the sound is superior, as it always was for the Sutherland/Bonynge projects.  I love listening to these albums from this era with their deep, ample soundscape. These are the opera recordings I grew up listening to, and back in the 1970's they were the best sounding on the market.  Back then it was RCA versus London, and the latter always won out when it came to audio quality.  For this recording, the drawing card was the participation of Montserrat Caballé, herself a great Norma, and Samuel Ramey who had just graduated from the New York City Opera to the MET.

Richard Wagner loved this opera.  He was a great admirer of Vincenzo Bellini's amazing talent for melodic writing.  He wrote "of all Bellini's creations Norma is that which unites the richest flow of melody with the deepest glow of truth." Wagner even went on to write an insertion aria for a bass of his time during his stay in Paris in September, 1939.  The aria is called "Norma, il predisse, O Druidi."  You can experience it in this video below:

Posted by Vincent Vargas at 4:41 PM