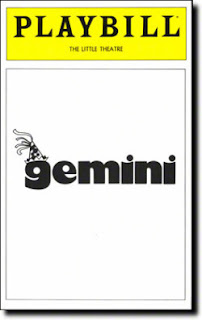 Ask anyone who grew up in the late 1970s about the play Gemini, or its author Albert Innaurato, and they might not remember anything about them, but mention the TV commercial of the Broadway run of the play and the line "I'll just pick!" and instant smiles of recognition will certainly follow.  Of course, for Broadway lovers who came of age during the 1970's (I graduated from high school in 1977) Gemini was an important production.  Lured by the commercial, me and a few friends ventured into the city from Queens, and not only saw the play, with its original cast, but waited around afterwards to meet the cast and get their autograph.  I still have the original Playbill from this show, its cover signed by everyone in the cast.

Albert Innaurato died in New York City at the age of 70.  He was never able to repeat the incredible success of Gemini, a show that ran for four years.  A great opera lover, in his later years he turned to the Internet providing opera reviews for the website Parterre Box as well as magazine reviews and articles for Opera News, the official publication of the Metropolitan Opera.

Gemini was a landmark play from the pre-AIDS era.  It celebrates the sexual awakening of an opera-loving, Maria Callas-worshiping Italian young man in blue-collar Philadelphia.  Essentially, an autobiographical slice of life of Innaurato's own life.

The lights will dim on Broadway's theaters to honor the passing of a singularly talented voice in the American Theater.

Posted by Vincent Vargas at 3:54 PM