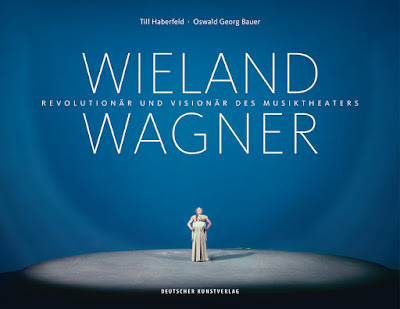 Whether or not you read German, the book to get this year if you are a fan of the works of Richard Wagner is Wieland Wagner, Revolutionär und Visionär des Musiktheaters by Till Haberfeld and Oswald Georg Bauer, a beautiful coffee-table volume published by Deutscher Kunstverlag on the occasion of the 100th anniversary of the birth of Richard Wagner's grandson.

Wieland Wagner, a trained artist, the son of Siegfried Wagner, the composer's only son, was the person on whose shoulders fell the responsibility for the reopening of the Bayreuth Festival in 1951 after Germany's defeat in World War II.  His mother Winifred, who ran the festival from 1930, became a staunch supporter of Adolf Hitler, and she was forbidden to run the festival after the war.  It was up to her children, Wieland and his brother Wolfgang, to get the festival up and running again. Wolfgang would attend to the business side of the corporation, while Wieland became its artistic director.  His dark, stark productions brought about a new style to the works of his grandfather.  "Neue Bayreuth," the critics called it.  "Light is for me the new magician," Wieland would say to describe his stagings, and this new light served to rid Wagner's works of the Nazi associations that had accumulated during the years of German National Socialism.

The cover of this book tells it all.  That wonderful photograph of Wolfgang Windgassen and Martha Mödl in the third act of Siegfried from Wieland's rapturous 1956 staging of the Ring of the Nibelung is a portent of what you will find inside the covers of this new publication.  Here are beautiful color and black-and-white photographs of all the productions that Wieland designed at Bayreuth and elsewhere.  It is a treasure trove for all of us who were too young to be part of the Wieland Wagner years, and who only know his work from inferior photographs on the Internet.

To commemorate the anniversary of Wieland's birth, I made a video podcast which you can see by going here.

You can buy this book by going to this link.
Posted by Vincent Vargas at 3:29 PM