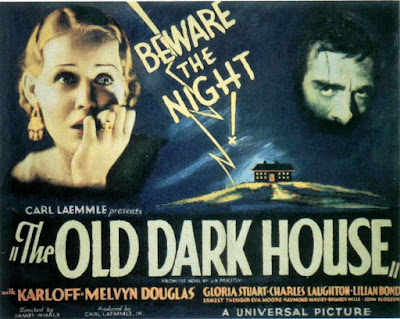 The New York Film Festival opened on Thursday (likely as a result of Yom Kippur) instead of the usual Friday night with Richard Linklater's film Last Flag Flying, a road film about three aging Vietnam veterans reuniting to bury the only child of one of them who died in the early days of the Iraq invasion.

This afternoon I will be attending a screening of The Old Dark House, the 1932 gothic comic Universal film, directed by James Whale and starring Melvyn Douglas, Gloria Stuart, Charles Laughton, and Boris Karloff in his first credited role.  His name was left out of the credits in the earlier Frankenstein.)

At the Lyon Lumière Film Festival it was announced by Cohen Media Group Vice President Tim Lanza that along with Universal they were working on a restoration of this film.  This is what will be shown this afternoon at Lincoln Center. The blue-ray will be released on October 24th right on time for Halloween.

Back in October, 2016 Variety reported that The Old Dark House was considered lost until director Curtis Harrington discovered material in the late 60s.  The Cohen Media Group will be using material stored in the Library of Congress.  It will be a 4K restoration.  I will be publishing a review of the screening tomorrow.
Posted by Vincent Vargas at 9:22 AM