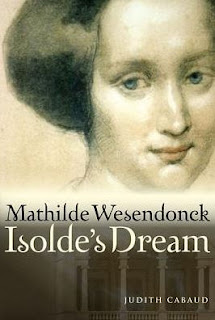 Author Judith Cabaud will be at Barnes & Noble (33 East 17th Street, New York City) to sign her new book Mathilde Wesendonck, Isolde's Dream.  Here is a blurb about the book from the B&N website:

"Truly great compositions spring, like Athena from Zeus' skull, at the juncture of genius and passion. In Mathilde Wesendonck: Isolde's Dream, author Judith Cabaud calls on a host of heretofore undiscovered resources to tell the story of Mathilde Wesendonck, muse and paramour to Richard Wagner and, later, Johannes Brahms. Alma Mahler, eat your heart out. In or about August 1857, Richard Wagner's character changed. He abandoned Der Ring des Nibelungen, the Gesamtkunstwerk he'd begun work on nearly a decade earlier, tore through a short set of songs now known as the "Wesendonck Lieder," and dove headlong into Tristan und Isolde, "eine Handlung" whose seminal influence would ricochet down the ensuing century of Western romantic music. Why the dramatic shift? Wagner had been struck by lightning twice. The first bolt was sighted across Europe; his name was Arthur Schopenhauer. The second was restricted to a insular social world centered at the estate of Otto Wesendonck, one of Wagner's patrons. Her name was Mathilde Wesendonck, and this is her story."
Posted by Vincent Vargas at 4:23 AM