Thirty-five years since Blade Runner opened to mixed reviews and disappointing box office receipts, a sequel to the sci-fi, dystopian neo-noir is now playing in the theaters, executive produced by Ridley Scott, the director of the original film.  Blade Runner 2049, directed by Denis Villeneuve is the kind of film that tries to cash in on the gravitas of the original while paving new ground and building its own "universe."  In many ways, it's a losing battle.  The scenic design of the new film is firmly rooted in the look of the original film, with some key improvements.  The Los Angeles landscape, dominated by electric Asian-themed billboards are back, but this time upgraded to three-dimensional holograms.  It's a good visual development. Times Square has already caught up to Ridley Scott's vision of the future.  The smoky, rainy landscape is also present, perhaps even more beautifully recreated through the use of computer generated effects, something the original film did not have in the analogue Hollywood of the 80s.

Based on Philip K. Dick's novel Do Androids Dream of Electric Sheep, Blade Runner has had a confusing history of different versions since its original 1982 opening.  There was the cut that featured narration that tried to mimic the golden age of Film Noir, and failed to catch its poetry and cadence.  Harrison Ford's otherwise impressive voice was all wrong in its quest to mimic the gumshoe pulp parlance. Unfortunately, this is how most people first met this film.  The so-called happy ending that version had also did not make too much sense given the downbeat look and feel of the rest of the film.  A 1992 director's cut that eliminated the narration and the happy ending started to make new disciples of some critics that had orginally panned the film.  A 2007 theatrical showing of what Mr. Scott calls "The Final Cut" finally brought this film into the realm of masterpiece. It only took two decades! 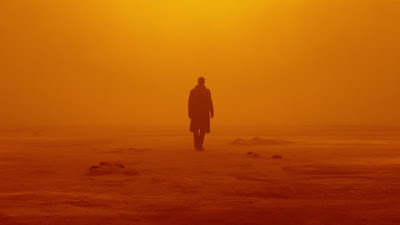 Now the sequel moves the timeline over forty years to the future where L.A. is even more noir than ever, and where the blade runners, such as our hero K, who at one point calls himself "Joe" (Ryan Gosling as a futuristic Kafkaesque Joseph K.) is himself an android, haunting down replicants and untangling a mystery I will not reveal here.

The most impressive aspect of Ryan Gosling's character is the way he is able to make us believe that androids harbor feelings.  This android knows that he is merely a copy of us.  But in the recesses of the computer programs that make him tick, I'm sure that he suspects that humans might just be copies of them.  This is one of the central themes of Mr. Dick's novel, although the film does not enter fully or convincingly into this conundrum.  I'm sure that K understands his existential melancholia: his devoted girlfriend named Joi (played by Ana de Armas) is nothing more than a computer program.

Even more impressive is Roger Deakins brilliant cinematography which lights an equally brilliant set design by Dennis Gassner was for me the most memorable aspect of the film.  Mr. Deakins has been nominated thirteen times for the Academy Award and has lost each time.  Perhaps this is the one that brings him the gold.
Posted by Vincent Vargas at 2:22 PM