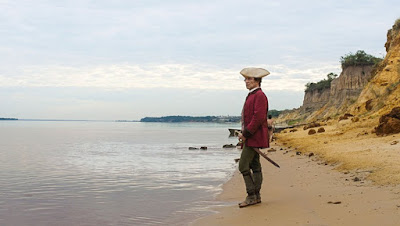 In Zama, director Lucrecia Martel crafts an impossible film out of Antonio Di Benedetto’s 1956 existential soliloquy of a novel.  Hers is a rumination of late 1700s Spanish “Corregidor” Don Diego de Zama, (played by Daniel Giménez Cacho) a colonial officer longing for the King of Spain to transfer him to the city of Lerma, an El Dorado he has never seen.   In many ways the first shot of the film (pictured above) tells the entire movie: Zama looking out at the horizon, waiting for a transfer that will not come.

We are in Spanish territory, a remote river town, in what is now Argentina or perhaps Paraguay, a wilderness tamed by the white man who has subjugated the native indigenous population.  Although the Spaniards continue to dress in the European fashion, “barbarism” has slowly crept in. Zama’s powdered wig has not been powdered in years, and the tropical weather has added to the wear and tear — perhaps the first sign of the crumbling empire which will lose its colonies in the next century.

But despite the carefully recreated period, this is a film in search of an interior monologue. We are inside Zama’s mind, a later Don Lope de Aguirre, who unlike Werner Herzog’s character, is less the wrath of god and more a psychologically wounded anti-hero in search of redemption.  Ultimately, his seemingly tragic end at the hands of a Portuguese bandit, is the event that sets him free. 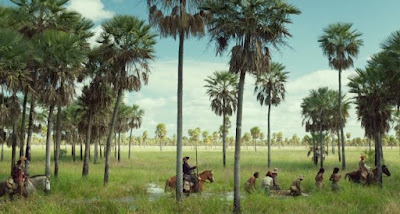 When Zama joins a group of bounty hunters looking for a bandit, the color palette of the film comes to life.  The shot of the group moving across palm trees and green plains is just marvelous.  Portuguese cinematographer Rui Poças shoots the jungle with the flair of a painter.  At one point the group is captured by a group of Indians, whose bodies are painted red.  The nude bodies photographed against the very green of the jungle is one of the most memorable series of shots in the film.

At the start of tonight's showing, at the New York Film Festival, it was announced that the film had acquired distribution.  This is great news, because every film in the festival should be seen not just by those who are able to attend the festival.  Also at the Q&A after the film, director Martel announced that Argentina has chosen this film as an Oscar contender for Best Foreign film.  With such people as Danny Glover, Pedro Almodóvar and Gael García Bernal, among other notables, as producers, they have a very good chance of being selected.  I hope they get it.
Posted by Vincent Vargas at 5:03 AM