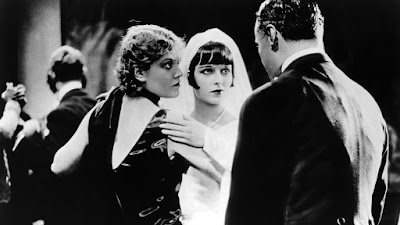 We will never know what G.W. Pabst’s great film Pandora’s Box must have looked like when it was first shown in the late years of the silent era.  This restoration, however, allows us a glimpse of the visual wonder it must have been. As we look at the detailed restored images, we are dazzled by the care it must have taken to get the film to this state, and at the same time we realize that we are watching a mere ghost of what the original nitrate negative must have yielded for those original Berlin audiences who were lucky enough to have seen the film upon its release. They would have experienced amazingly sharp contrasts and silvery images that a restoration working with many prints from all over the world, and lacking an original negative can only hint at. Tonight, at the screening of this film at the New York Film Festival we saw a ghostly glow of years past.

The ravages of time may have taken away much of the luster of this film, but the power of the narrative and the shock of the story still remain as fresh as ever.  This is enough for me to call this restoration a triumph. It may only be a mere shell of what Pabst intended, but it’s the closest we are ever going to get to the director’s original visual intention.

The film was shown with a live orchestra featuring a newly composed score composed and conducted by Jonathan Ragonese.  The composer opted for expressionistic sounds and dissonant outbursts that hinted at Alban Berg's twelve-tone opera Lulu, a 20th century masterpiece based on the same source material as this film.  I enjoyed the experience of watching it with live musicians, and the score was a successful match for the film.  My only complaint with Mr. Ragonese's composition came at the end of the film.  The final scene, taking place in an expressionistic-looking London, features the Salvation Army playing a Christmas carol, and the denizens of a pub rising to sing along.  It struck me as odd that the composer chose to appropriate the German carol "O du fröliche" for this scene instead of a British carol.  I'm sure he chose this tune because of its beautiful melody and for its ironic title (there is nothing "fröliche" (joyful) about the conclusion of Pandora's Box), but I can assure you that a German carol has never been sung at any pub where Jack the Ripper would have hung out.
Posted by Vincent Vargas at 9:41 PM