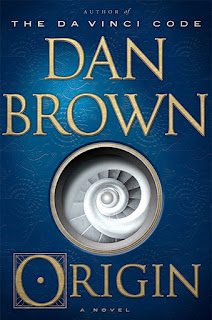 I'm looking forward to reading the new Robert Langdon adventure book by Dan Brown.  According to advance reviews, it promises to be as controversial as his best-selling The Da Vinci Code. Origin, his new novel, is a story that pits creationism against science as a futurist billionaire comes up with a theory so shocking that it might just change the course of the world.  As the story opens, Langdon is attending a lecture at the Guggenheim-Bilbao Museum by Edmond Kirsch, who just happens to be one of Robert Langdon's first students at Harvard a decade earlier.  The lecture throws into jeopardy the entire world's belief system, and this triggers an adventure that sends Langdon (and of course a pretty and ultra-intelligent female companion) all over the world.

Yes, it is formula!  But since The Da Vinci Code locked heads with the Vatican, Mr. Brown has used this formula to make millions.  His books become instant best-sellers; they are translated into hundreds of languages, and eventually are adapted into motion pictures, not always very successful, but it does give Tom Hanks a steady job these days.

The fact that a large part of the book takes place in Spain, and that Barcelona's La Sagrada Familia (one of my favorite churches) plays a large part in the narrative because of its relationship between religion and the nature (architect Antoni Gaudí based himself on natural forms in the concept of his temple) is enough reason for me to attempt to devour the book.  Which is actually the best way to approach Brown's literature.  Don't think about it, just get through it.
Posted by Vincent Vargas at 7:21 AM